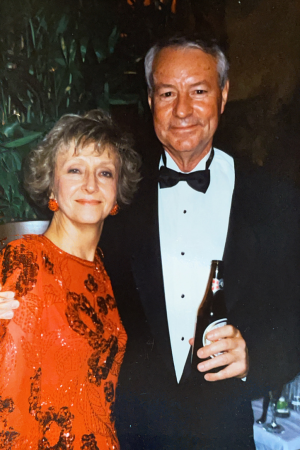 Ruth grew up in Conneaut Lake, Penn., where she and her husband, Gene Teter, met in 7th grade.

She and Gene attended Thiel College in Pennsylvania and married a year after graduation.

Gene had begun his career as a naval aviator, a path that took them from Virginia to Florida and, for many years, back and forth between California and Texas.

Ruth and Gene had four children during those years and Ruth was very busy as a mom, Navy wife and maintaining a home, often by herself, due to Gene’s Navy career.

Ruth began her own career as a legal secretary in Hanford, Calif., once the children began high school. Life then took the family back to Texas, where she became a legal assistant for the county attorney in Beeville, Texas.

Ruth and Gene moved to Washington, D.C., for Gene’s last tour and where Ruth served as executive assistant at A.T. Kearney and then EDS. Gene retired as Ruth continued her career as a consultant before they moved to Monument, Colo., in 2001.

Ruth lived a happy, quiet life with Gene in their Colorado home. She continued her love of cooking, enjoying the mountain views, gardening, bird watching and traveling to visit children, grandchildren and grand-puppies.

She was preceded in death by her parents, William and Marion, and her brother, Vince Mocarski and his wife, Betty.

A memorial service celebrating Ruth's life will be announced at a future date.

To send flowers to the family or plant a tree in memory of Ruth M. (Mocarski) Teter, please visit our floral store.

You can still show your support by sending flowers directly to the family, or by planting a memorial tree in the memory of Ruth M. (Mocarski) Teter
SHARE OBITUARY
© 2022 Tri-Lakes Funeral & Cremation. All Rights Reserved. Funeral Home website by CFS & TA | Terms of Use | Privacy Policy | Accessibility