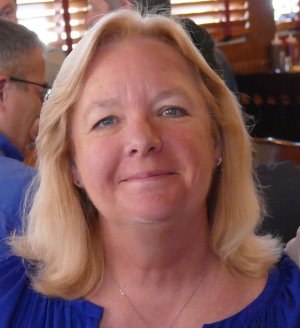 Patti Jean Tracey (Bowser) January 31, 1958 to November 2, 2021. Pat was called home to be with our Lord on November 2, 2021. She was born in Kodiak, AK to Edward and Marian (Kuhn) Bowser. She was proceeded in death by her mother and father. She leaves behind her husband of 43 years (Tim) and two children: daughter Katherine and son Steven, sisters: Lee Jo Dykstra (Rudy, deceased) and Bonnie (Noel), and brother Roy (Peggy).

As a child, Pat was moved around a lot after her father retired from the Navy and was home alone with her parents after her siblings (10+ years older) moved away.  Her parents did settle down during her high school years in Clermont, FL, which she considered home.  Upon her high school graduation, she joined the Air Force at her brother’s recommendation and became a Digital Flight Simulator Specialist, which provided a solid foundation for the remainder of her career. After her technical school she reported to Castle AFB, CA, where she met her husband.  After 5 years of Air Force service Pat left active duty and was a computer field repair technician. She serviced hospital administrative systems until being hired back into the Air Force as a civilian at McClellan AFB, CA. Her last promotion brought Pat to Colorado Springs, CO and helped establish McClellan AFB’s Detachment 25, which was to support Air Force Space Command with their weapon system logistics programs. She completed her Bachelor of Business Administration degree at Regis University and excelled in the Air Force in both her active duty and civilian positions. Pat always believed in God, but realized something was missing in her life and was baptized a Christian in the late 1990’s. After 22 years combined service she reached a glass ceiling and left for bigger challenges. After a brief time at MCI, she received a job offer from the Lockheed Martin (LM) Corporation which she accepted and, again, excelled rising to the position of Sustainment Program Manager for a very large Missile Defense system. She forged many lasting personal and professional relationships in her time both in and out of the government and truly loved the people who worked for her at LM.

Luckily for her husband Tim, Pat really enjoyed riding motorcycles with him and spent “a lot” of time on or around motorcycles. She had many motorcycles herself and a motorcycle endorsement on her license, but preferred to ride on the back of Tim’s motorcycle and enjoy the scenery! She supported Tim’s amateur off-road motorcycle racing for many years, helping him to the hospital on more than one occasion. Both Katie and Steven raced motocross and many, many weekends were spent at various tracks. Pat made many friends with other parents at the races that remain in place today.

After retirement, Tim and Pat upgraded their RV and began travelling all over the country visiting friends and sightseeing. Covid-19 didn’t help these travel plans however, and thwarted her wish to visit Alaska and tour Europe as it has done for everybody. After returning home from a trip to Glaser National Park, Washington and Oregon in August 2020 Pat found out she had breast cancer; Pat (and Tim) opted for the solution with the best odds of beating this horrible disease. She soldiered through the treatments (chemotherapy and radiation) and surgery without ever giving up, or complaining.

Pat was a confident, dedicated, dependable, honest, loving, caring individual who always saw the bright side of everything. She wore her emotions on her sleeve and what you saw is what you got. She would do anything she could for anybody who needed it. She will truly be missed.

To send flowers to the family or plant a tree in memory of Patti Jean (Bowser) Tracey, please visit our floral store.